Traveling with your pets can be tough—especially when you’re trying to fly with snub-nosed dog breeds like pugs, bulldogs, and Pekingese dogs. Many airlines won’t take what they classify as brachycephalic dog breeds on their flights, which can be a major inconvenience as you try to arrange alternative travel methods for your beloved pooch.

You may be wondering: “Why can’t snub-nosed dog breeds fly? What airlines will allow snub nose dogs? How can I take my short-nosed dogs with me when I travel or have to move?”

Let’s examine the issues with snub nose dog travel, why airlines often refuse to take them, and how you can safely move your beloved pet across the country when you’re on vacation or move to a new home.

What Does Brachycephalic Dog Breeds Mean?

The phrase “brachycephalic dog breeds” is basically a fancy way of saying that a dog has a shortened muzzle and nose. As noted by the American College of Veterinary Surgeons (AVCS), “These dogs have been bred to have relatively short muzzles and noses and, because of this, the throat and breathing passages in these dogs are frequently undersized or flattened.”

So, when you hear the term “brachycephalic dog breeds,” you can think of it as meaning “snub-nosed dog breeds.”

Because of their shortened muzzles and noses, brachycephalic dog breeds are prone to severe respiratory issues. As the American Veterinary Medical Association (AVMA) states, short-nosed dogs “don't breathe as efficiently as dogs with normal-length snouts and can have difficulty cooling off when they're playing or exercising, or if they're stressed or overheated.”

In most airlines, if your dog cannot be taken into the cabin as a carry-on (because they’re too large or are on that airline’s list of restricted dog breeds), they are put into the airplane’s cargo hold. The problem with this is that temperatures and air quality in a cargo hold—even one that is pressurized and kept similar to the passenger cabin—can shift severely during the flight.

As the AVMA article notes, “Because of their anatomical abnormalities, short-nosed breeds seem to be more vulnerable to changes in air quality and temperature in the cargo hold of a plane.” Additionally, because there’s no one in the cargo hold to watch your pet at all times, if your short-nosed dog has a problem midflight, they won’t get critical care right away.

This has led to numerous deaths of short-nosed dogs during airline flights—forcing a change in airline pet policy.

Most airlines will not allow snub-nosed dog breeds to fly unless the dog is small enough to be taken in as a carry-on. Some airlines have banned snub-nosed dogs entirely—according to one New York Times article, “United officially stopped flying brachycephalic breeds… last June” (the article was published in April 2019).

Each airline has different rules about which pets they will or will not allow on their planes—and these rules can change at any time in response to changes in leadership, current events, or new laws. So, the best advice is to, when looking for an airline, to check with that airline to see if they’ll accept your beloved dog.

You could also look for a specialist pet carrier service online. For example, you could check with the International Pet and Animal Transportation Association (IPATA) for air and ground shipping companies to carry your pet to your destination. However, even with IPATA’s search tool, it’s still important to reach out to the carrier directly to see if they’ll accept brachycephalic dog breeds.

What If My Airline Won’t Take My Short-Nosed Dogs?

In many cases, you may need to book alternative travel methods for your pets to carry them safely across long distances. If there are no air carriers who operate in or near your origin and destination locations, you may want to consider rail or car-based transportation methods.

It isn’t always easy to find ways to safely carry your four-legged friends from one place to another. However, there are services that can help. Have questions about how My Pet Cab works to move your pooch across the country? Call us at (877) My-PetCab and ask us anything about pet transportation!

The MyPetCab team consists of animal lovers who are dedicated to helping your pet travel safely. That’s why we work hard to create useful and informative content for our blog! 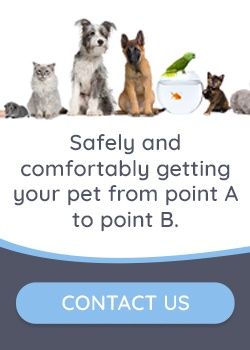 8 Tips for Bringing Home a New Dog or Cat

When you’ve finally settled on your new pet, bringing it home is very exciting! Of course, some new pets are easier to plan ...

5 Things to Do When Moving with Pets

Whether you’re moving for work, family, or just to make a fresh start, it’s often a daunting task with a lot of planning ...

4 Methods of Pet Transport to Consider When Moving

Moving can be an exciting time, but if you have a pet, it can also be a very stressful time—for you and your best friend. When ...